“In science we trust”. Not because it is perfect, or the only way to truth. But as a way forward for humankind, it is hard to beat. Most importantly, in its quest for knowledge and truth, it has developed extraordinary strong mechanisms to constantly check and improve itself. It is a strong driver of human progress. As I wrote earlier this year in the old fashioned way, on paper: "science and courage have shown us the way out of the cave".

Earlier this week I learned that the 2006 Nobel Prize for medicine or physiology was awarded for the discovery of gene silencing by RNA interference, which was discovered in 1998 by Fire and Mellow, and this brought back memories from my first postdoc position.

In the early nineties, as an ambitious but somewhat insecure young scientist who felt lucky to have obtained a postdoc job as a molecular biologist after having done a cell biology PhD, I cloned a cDNA fragment that yielded a Northern blot signal that took me some time to decipher. It was cloned by differential screening and named “255” because that was the number of the clone. The picture shows two lanes of RNA. The left lane contains RNA isolated from undifferentiated HT29-D4 colon carcinoma cells, the right lane contains RNA from differentiated cells. The blotted RNA was hybridised with the radiolabelled cDNA probe 255. It appears that a single species of RNA (just above the 5S RNA band) is more intense in the differentiated cells, whereas the ‘smear’ is more intense in undifferentiated cells. 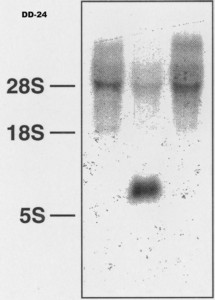 Subsequent experiments yielded similar but not identical clones, e.g. DD-24 (isolated by differential display). The small RNA just above 5S appears to be the same as in 255, but the ‘smear’ hybridisation is less intense as compared to the small RNA. The signal in the third lane (HeLa cells) is the same as in the undifferentiated HT29-D4 cells.

After some thought, I concluded that the pattern could be explained by assuming that the small RNA that became more intense with differentiation represents an RNA whose expression suppressed that of many other genes (the ‘smear’ in the picture). I reckoned these genes were detected because they shared a homologous region with the ‘suppressor’ RNA, which was involved in the putative mechanism of suppression.

When I discussed this hypothesis with the senior group leader who was appointed as advisor of my project (by his and my boss, the MD/PhD department head who lacked expertise in molecular biology), he remarked with just a little hint of unbelief and disapproval “This could be the Nobel Prize, but it is more likely to be an artefact and a distraction from your project”. The concept of RNA interference was unknown at that time. He had much more experience in molecular biology than I had, so I took his advice and did not further explore these findings, focusing instead on cDNA clones that looked like real mRNAs. Alas, I never published the findings mentioned above.

To check the advisor’s qualities as a prophet, upon learning the news of the 2006 Nobel Prize I dug out the data from this project. At the time of cloning, the DNA sequences of 255 and DD-24 were unknown. Checking again now the human genome project is finished, significant similarities with published sequences were found. Clone 255 turned out to be part of the coding sequence of TMEM50B, a human transmembrane protein. Clone DD-24 partially matches a human BAC clone, however, the sequence annotation did not mention specific features in this region.

So for me the intriguing question remains: was I indeed looking at an artefact, or was my hypothesis correct and was this an early finding of interfering RNA? I have left this project since 1994, and molecular biology since 1998, so any clues from readers are welcome.

As you may imagine, this little story features large on my list of potentially missed opportunities (trumping the glimpse of EGF receptor heterodimerisation during my PhD work, well before EGFR2-4 were discovered). I wonder what would have happened if I would have disregarded the advice, and pushed forward investigating these unexpected findings. It might have ended in disaster (especially the EGFR project, which could have jeopardised completion of my PhD work). Apart from my personal failings to pursue these research findings, I wonder about the influence on both my advisors and myself of the Dutch system of research funding that was operating at the time. To me the system seemed largely risk-averse, favouring scientists who slowly but solidly built their little piece of the temple of knowledge over those who tried to speed up by experimenting with novel building materials and designs. So be it. When in 1998 - a few years too late, as I realised later - I shut the university doors behind me for a position in industry, the relief was greater than the regret.

Still with me? Thank you! I’m impressed. Apologies if I got too technical above. Future postings may see more mundane topics like the upcoming Dutch elections, and the lack of real choice as I perceive it now (I’ll study this more deeply when we are closer to election time). I may dwell on the joys of living in the ‘ever closer’ European Union, especially when living in one member state and working in another, having to deal with regulations and taxes in both - not to mention the daily 203 km commute :-(. Science and politics of GMO (Genetically Modified Organisms or Greenpeace Membership Operation, whatever you prefer) also interest me. Perhaps I will introduce you to my favourite author, Nicholas van Damme. I’ll try to avoid the topic of religion, but may not always succeed; it seems the scars of my Calvinist childhood are not yet completely healed.